It is important to remember that leukemia is not a static condition. A patient’s disease at diagnosis can be modified by the treatments received and the related clonal evolution that occurs due to the selective pressure of different therapies. The genomic information identified at one treatment timepoint may be very different than that detected at a subsequent timepoint due to these different patterns of clinical progression.1,2

FMS-like tyrosine kinase 3 (FLT3) mutations are found in between one-quarter to one-third of patients with AML, more commonly in younger patients, those with de novo AML and those with diploid or otherwise intermediate cytogenetics. These mutations lead to continued constitutive activation of the FLT3 receptor, leading to activated proliferation and pro-survival pathways. The FLT3-ITD variation has been identified as an independent predictor of poor prognosis.3,4 Multiple FLT3 inhibitors are undergoing study at this time. Midostaurin is approved by the United States Food and Drug Administration (FDA) for use with standard intensive chemotherapy in newly-diagnosed patients with AML.5,6 Gilteritinib is also approved for use in the United States for treatment of relapsed or refractory AML with a FLT3 mutation.7 In addition, other type 1 FLT3 inhibitors are undergoing study, namely crenolanib, sorafenib, and quizartinib.5,8

Gilteritinib was studied in the phase 3 ADMIRAL trial in over 350 patients with FLT3-mutant, relapsed/refractory AML. Patients were randomized 2:1 to gilteritinib vs salvage chemotherapy (either high-intensity MEC [mitoxantrone, etoposide and cytarabine] or FLAG-IDA or lower intensity low-dose cytarabine or azacitidine). Results demonstrated that the complete response (CR) rate in patients who received gilteritinib was nearly doubled compared with those in the salvage chemotherapy cohort, with a CR/complete response with partial hematologic recovery (CRh) rate of approximlately 34% in the gilteritinib patients compared to 15% in the chemotherapy group).9 (Figure 1). In terms of safety, adverse events associated with gilteritinib were found to be equivalent or less than those those usually seen in patients with relapsed/refractory disease aside from a higher rate of increased aspartate aminotransferase (AST) in the gilteritinib group, which bears a need for monitoring with therapy. Overall, patients who received gilteritinib demonstrated a 12-month overall survival (OS) of 37%, vs 17% with salvage chemotherapy.9 It should be noted that the phase 1 and 2 CHRYSALIS trial of gilteritinib was performed prior to the ADMIRAL study, and a difference in response rate was seen between patients naïve to FLT3 inhibitor therapy vs those who had received a prior FLT3 inhibitor (eg, sorafenib, midostaurin). In CHRYSALIS, there was an overall response rate (ORR) to gilteritinib of 56% in treatment-naïve patients vs 42% in those with prior tyrosine kinase inhibitor (TKI) therapy.10 In addition, approximately 80% of patients achieved a major molecular response (MMR) with gilteritinib.11 Finally, looking at survival following hematopoietic stem cell transplantation in the ADMIRAL trial, the median OS was 16.2 months for those patients who resumed gilteritinib therapy vs 8.4 months for those who did not, showing a significant improvement in survival for those who resumed FLT3 inhibition post transplant.12 Looking at transplant patients, it should be noted that similar results were seen with sorafenib administration after allogeneic SCT, with a two-year relapsed-free survival of 85%, vs 53% with placebo.13 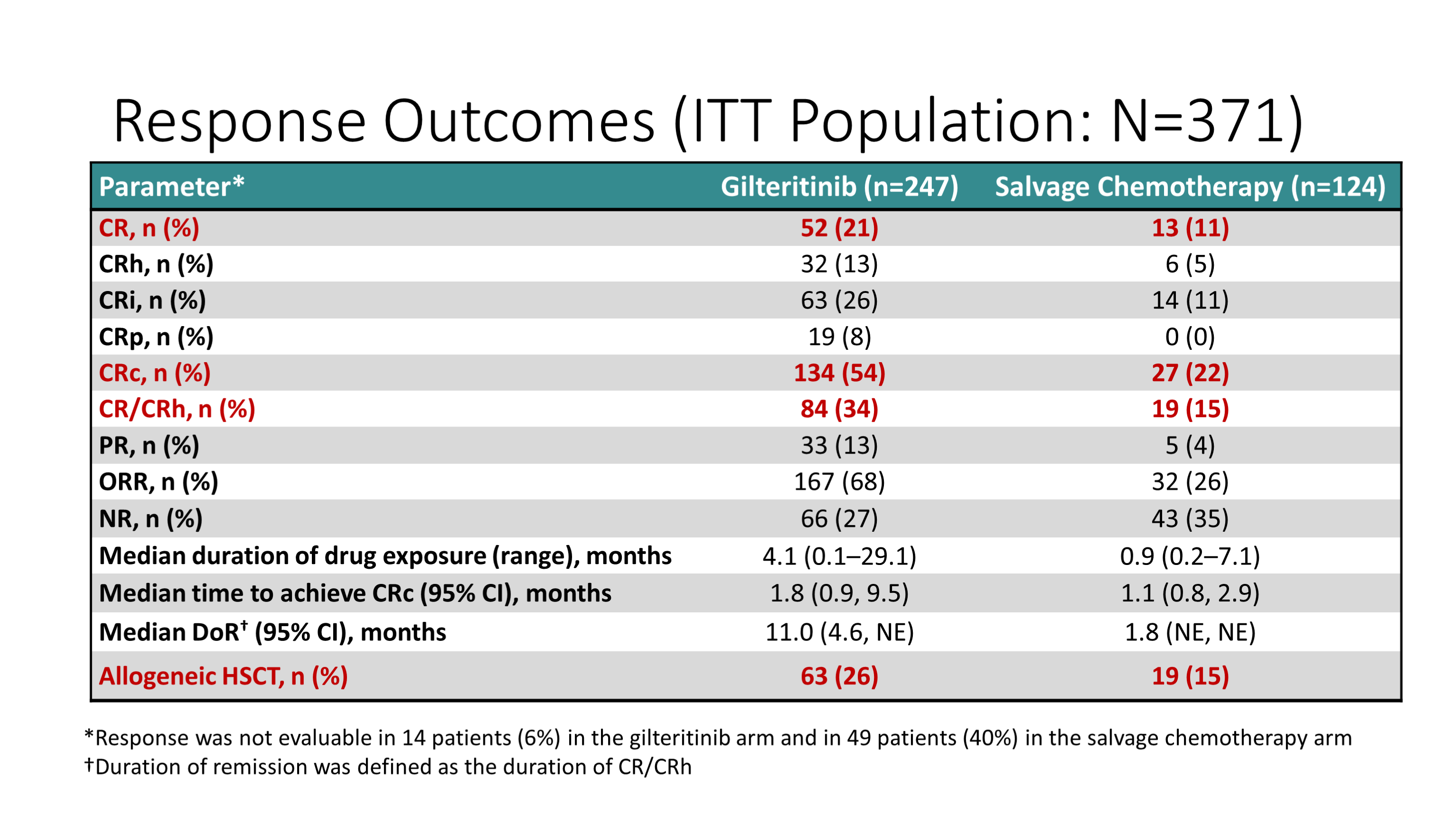 Isocitrate dehydrogenase (IDH) mutations are another evolving target in AML therapy. IDH1 or IDH2 mutations occur in approximately 20% of patients with AML, with an increasing prevalence with advancing patient age. Additionally, about 10% to 15% of patients with myelodysplastic syndromes (MDS) and up to 25% of patients with myeloproliferative neoplasms (MPNs) can have an IDH1/2 mutation identified at the time of progression/transformation to AML.14-16 Mutant IDH results in accumulation of the oncometabolite 2-hydroxyglutarate (2-HG) which competitively inhibits alpha-ketoglutarate dependent reactions. 2-HG leads to DNA and histone hypermethylation, and a resultant block in differentiation.17 Ivosidenib is a small molecule IDH1 inhibitor, and enasidenib is a small molecule IDH2 inhibitor, and both are FDA-approved for the treatment of patients with IDH1 or IDH2 mutations, respectively. While they are different agents, their response rates in general are similar, with a CR rate of about 20% and an ORR of approximately 40% as a single agent in the relapsed/refractory setting. (Figure 2).18,19 In addition, transfusion independence is observed with IDH inhibition therapy, even in the setting of stable disease. Additionally, responses to therapy evolve over time such that if a patient is responding to therapy over 1 or 2 cycles, there is no need to stop treatment, and maximal benefit can be achieved with time, often up to 6 cycles.19,20 Because IDH inhibitors are differentiating agents, differentiation syndrome (DS) can occur with their use, including a non-specific constellation of fevers, pulmonary infiltrates, pleural effusions, and shortness of breath. Standard therapy for DS includes steroids, and holding IDH inhibition is warranted if the patient is ill and hospitalized. That said, the half-life of these agents is long, so steroids are needed as the primary mechanism to rapidly reverse symptoms.21,22

Mutational clearance is a significant issue in these patients. Data have also shown that patients with deep IDH mutational clearance had improved duration of response (DOR) and OS vs those who achieved CR/CRh but who had persistent IDH1 mutation detected following therapy. This was defined as a reduction in mutant IDH1 variant allele fraction (VAF) to below the limit of detection by digital polymerase chain reaction (PCR) specifically 0.02-0.04%.23 The number of concurrent mutations in patients with mutant IDH AML is also an important consideration in therapy. Patients with 3 or fewer concurrent mutations have a much higher chance of obtaining a CR or CR-like response, as compared to patients with 6 or more mutations where the likelihood of a CR is far less. Overall, co-mutational burden is a critical factor when using IDH inhibitors, at least as monotherapy.24

In addition to the above, we are running a study which is combining ivosidenib with the B-cell leukemia/lymphoma-2 (BCL2) inhibitor, venetoclax. At this point in time, 12 patients have been treated at two different dose levels of venetoclax in combination with ivosidenib and demonstrating an ORR of 75%, including a 42% CR rate. Such a compelling overall response rate even in relapsed patients, with several patients continuing on study for > 12 months at this time, suggests that combining therapies may provide even more durable responses for AML.25