Current and Emerging Therapies in Newly Diagnosed AML: Adapting Treatment to Meet the Needs of the Individual Patient

There has been a true “embarrassment of riches” in the evolution of treatment of AML over just the past two years. Since April 2017, nine new agents have been approved for the treatment of AML.1-3

Despite these remarkable advances, the question remains as to the actual benefit of intensive therapy in many patients with AML. These individuals are typically elderly, with 50% diagnosed at a median age of 67 to 70 years of age, where the benefits of potential intensive treatment must be balanced with the potential high morbidity and mortality associated with therapy. Early data from Lowenberg, et al., randomized older patients to standard intensive 7+3 chemotherapy or a “watch-and-wait” untreated cohort that would not be permitted in today’s research arena. Data demonstrated a near doubling in overall survival (OS) from 11 to 21 weeks with intensive therapy, so there was a benefit seen despite the related toxicities.4 This benefit was confirmed two decades later in the Swedish registry across the age spectrum from younger to older patients. While outcomes were strongly age and PS dependent, that data suggested that most patients with AML up to 80 years of age should be considered for intensive therapies, especially considering that 50% of those who were not treated did not survive beyond the first month post-diagnosis.5 We now know that 7+3 intensive therapy can be curative, but cure is seen in younger patients and patients with favorable gene fusions with outcomes varying dramatically based on disease biology.6

The first data surrounding efforts to improve upon standard 7+3 chemotherapy was presented in 2017, combining intensive chemotherapy with FLT3 inhibition. Patients with AML harboring FLT3 mutations typically have poor outcomes, and this study found that the addition of the multi-targeted kinase inhibitor midostaurin to standard 7+3 chemotherapy prolonged both OS and event-free survival (EFS) in this patient population. This was the first targeted agent added to standard therapy over decades of research that actually improved patient outcomes. Further analysis of the data suggested that some of this benefit may have been related to allogeneic transplantation which was performed in 57% of patients in this trial; however, it remains that a 7% difference in OS with FTL3 inhibition is a valuable outcome7 (Figure 1). While these results were impressive, they reflected only the FLT3-mutant AML population. For those without this mutation, later data demonstrated that an older drug, gemtuzumab ozogamicin (GO) combined with 7+3 chemotherapy improved outcomes for favorable intermediate karyotype patients. The primary endpoint of EFS was significantly longer for patients in the GO plus 7+3 treatment cohort vs the 7+3 control arm (median 17.3 months vs 9.5 months, respectively)8 (Figure 2). Previous data for this agent published in 2014 demonstrated that the therapy benefit is primarily seen in patients with favorable karyotype with a >20% improvement in OS seen in a meta-analysis of 3,325 patients treated with GO in five randomized trials. However, benefits were also seen in patients at intermediate risk, with a 5.7% difference in OS, which suggests that GO may improve outcomes in patients with AML at intermediate risk.9 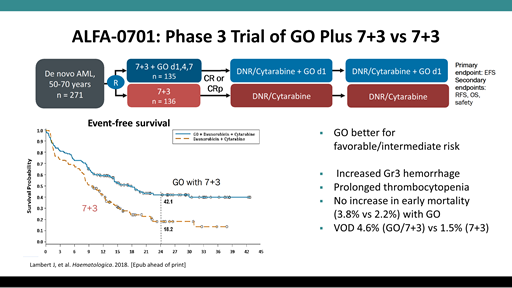 Another patient population that must be taken into consideration is those who develop AML and have pre-existing myelodysplastic syndromes (MDS). Patients with AML with a history of MDS or MDS-related changes (AML-MRC) typically exhibit 20% or more blasts in the peripheral blood or bone marrow and have previously documented MDS or myeloproliferative neoplasm (MPN), MDS-related cytogenetic abnormalities (eg, complex karyotype, chromosome 5 and 7 aberrations), or morphologic detection of multilineage dysplasia in the absence of CEBPalpha mutations.10,11 These patients typically have poor outcomes with standard 7+3 chemotherapy with survivals of only 5 to 6 months; however, liposomal 7+3/CPX-351 can dramatically improve these outcomes, with data showing significantly improved media OS vs standard 7+3 treatment (9.56 months vs 5.95 months, respectively). Outcomes post-transplant were also significantly improved in patients in the CPX-351 cohort.12

Hypomethylating agents (HMAs) can also be used for treatment of patients with AML. Data have shown that these agents are well-tolerated  with equivalent overall survival to 7+3 chemotherapy in older patients with AML, but with lower complete response/complete response with incomplete hematologic recovery rates (CR/CRi) of 20% to 30%. Because these agents demonstrate similar survival to cytarabine-based chemotherapy, they have been a primary therapy for older patients with AML.13 Data surrounding monotherapy with the HMA decitabine TP53-mutant patients with AML or MDS found a high response rate of 46%, with higher responses in those with unfavorable cytogenetics (67%) vs favorable/intermediate cytogenetics (34%).14

Venetoclax is another agent that has proven effective in older patients with AML. One recent study tested the agent in patients 60 years of age or older with previously untreated AML who were ineligible to receive intensive chemotherapy. Patients who previously received HMAs were also included. Among those treated with venetoclax and low-dose cytarabine (LDAC), 54% achieved CR/CRi, and median OS was 10.1 months. In those without prior HMA therapy, 62% achieved CR/CRi with a median OS of 13.5 months.15 Glasdegib is a Hedgehog pathway inhibitor, and combined with LDAC is another option for patients with AML who prefer an ambulatory, outpatient regimen not associated with significant cytopenia. Compared to LDAC alone, patients with AML and good or intermediate karyotype had an overall CR/CRi rate of approximately 20% and a median OS of 8.8 months compared to a CR/CRi of 2% and medial OS of 4.9 months for those who received LDAC alone.16 GO monotherapy also remains a potential option for older patients with AML who are unwilling to receive any other therapy; however, the associated CR/CRi rate vs best supportive care (BSC) is 27% and median OS is only 4.9 months vs 3.6 months with BSC.17

Additional new targeted therapies include small molecular inhibitors, including ivosidenib (IVO) which targets isocitrate dehydrogenase 1 (IDH1) and enasidenib (ENA), targeting IDH2. Both of these agents induce responses in relapsed/refractory patients with IDH1 and IDH2 mutant AML, respectively, and newly diagnosed IDH mutant patients appear to achieve similar CR/CRi rates to these agents used as monotherapy (42.4% with IVO vs 44.4% with ENA).18-20 (Figure 3). These inhibitors are now being studied in newly-diagnosed IDH-mutant patients in combination with 7+3 chemotherapy or hypomethylating agents. Finally, newer generation FLT3 inhibitors (including quizartinib, crenolanib, and gilteritinib) are being studied for upfront therapy of FLT3 mutant AML in combination with 7+3 as compared to midostaurin plus 7+3. Early trials have suggested that each of these agents resulted in higher CR/CRi and CR with partial hematologic recovery (CRh) rates (84%, 88%, and 93% respectively) than reported for midostaurin (59%).7, 21-23 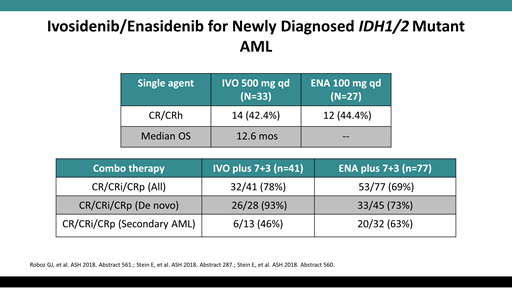